Thank you for visiting MicrofinanceInfo.com, reading our articles and following the blog about microfinance and microcredit. This website started as a project in the university when I studied in Germany, and is now a big source of information over microfinance with many visitor from all around the world. It´s quite obvious, microfinance is something that really brings the world together to cooperate for a better and sustainable future. There is so many people needing financing to get up on their feet and start their own lifes, especially now on Haiti after the catastrophic earthquake, and still there´s such a big lack of creditpossibilities.

That´s why it´s so important that you support microfinanceinfo.com to help us spread the word, and it does not cost you a thing. You can give your support in several ways. The easiest way is by becoming a fan of our facebookpage, or follow our twitterpage. You can also add a small linklogo on your site, if you have one that is.

To add this linkbutton on your site or blog, simply add this code:

If you would do all three of them, we really appreciate it and thank you by doing that!

The definition of microfinance 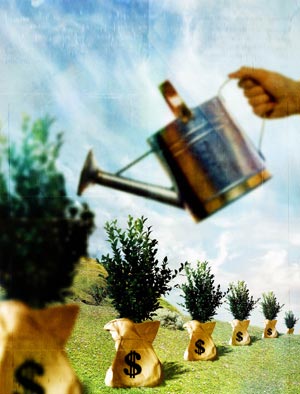 “Microcredit, or microfinance, is banking the unbankables, bringing credit, savings and other essential financial services within the reach of millions of people who are too poor to be served by regular banks, in most cases because they are unable to offer sufficient collateral. In general, banks are for people with money, not for people without.” (Gert van Maanen, Microcredit: Sound Business or Development Instrument, Oikocredit , 2004)

“(Microcredit) is based on the premise that the poor have skills which remain unutilized or underutilized. It is definitely not the lack of skills which make poor people poor….charity is not the answer to poverty. It only helps poverty to continue. It creates dependency and takes away the individual’s initiative to break through the wall of poverty. Unleashing of energy and creativity in each human being is the answer to poverty.” (Muhammad Yunus, Expanding Microcredit Outreach to Reach the Millennium Development Goals, International Seminar on Attacking Poverty with Microcredit, Dhaka, Bangladesh, January, 2003)

Microcredit belongs to the group of financial service innovations under the term of microfinance, other services according to microfinance is microsavings, money transfer vehicles and microinsurance. Microcredit is a innovation for the developing countries. Microcredit is a service for poor people that are unemployed, entrepreneurs or farmes who are not bankable. The reason why they are not bankable is the lack of collateral, steady employment, income and a verifiable credithistory, because of this reasons they can´t even meet the minimal qualifications for a ordinary credit. By helping people with microcredits it gives them more available choiches and opportunities with a reduced risk. It has successfully enabled poor people to start their own business generating or sustain an income and often begin to build up wealth and exit poverty. The amount of money that´s lended out seldom exceeds 100 USD.

Microcredit fits best to those with entrepreneurial capability and possibility. This translates to those poor who work in growing economies, and who can undertake activities that generate weekly stable incomes. For those who don´t qualify because they are extreme poor like destitute and homeless almost every microcredit institution have special safety programs that offer basic subsistence and later endeavours to graduate this members in their microfinance program making ordinary microcredits available.

Microcredit plays an important role in fighting the multi-dimensional aspects of poverty. Microfinance increases household income, which leads to attendant benefits such as increased food security, the building of assets, and an increased likelihood of educating one’s children. Microfinance is also a means for self-empowerment. It enables the poor to make changes when they increase income, become businessowners and reduce their vulnerability to external shocks like illness, weather and more.

Microcredit has widely been directed by the non-profit sector while commercial lenders require more conventional forms of collateral before making loans to microfinance institutions. But now it´s successfully growing bigger and getting more credibility in the traditional financeworld. Due to that the traditional banking industry have begun to realize that this borrowers fits more correctly in a category called prebankable. The industry has realized that those who lack access to traditional formal financial institutions actually require and desire a variety of financial products. Nowadays the mainstream finance industry is counting the microcreditprojects as a source of growth. Before almost everyone where neglecting the success of microcredit in the beginning of the 1970s when pilot projects such as ACCION where released until the United Nations declared 2005 the International Year of Microcredit.

The most of the microcredit institutions and agencies allover the world focuses on women in developing countries. Observations and experience shows that women are a small credit risk, repaying their loans and tend more often to benefit the hole family. In another aspect it´s also seeing as a method giving the women more status in a socialeconomic way and changing the current conservative relationship between gender and class when women are able to provide income to the household. Women are in most cases responsible for children, and in poor conditions it results in physical and social underdevelopment of their children. 1.2 billion people are living on less than a dollar a day. There are many reasons why women have become the primary target of microfinance services. A recent World Bank report confirms that societies that discriminate on the basis of gender pay the cost of greater poverty, slower economic growth, weaker governance, and a lower living standard for all people. At a macro level, it is because 70 percent of the world’s poor are women. Women have a higher unemployment rate than men in virtually every country and make up the majority of the informal sector of most economies. They constitute the bulk of those who need microfinance services.